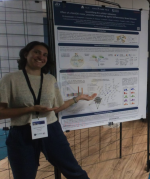 Congratulations to Martha Zoumpoulaki for winning the best poster prize at the summer school Metbio organized by the FrenchBIC.

Martha Zoumpoulaki got her MS degree in Molecular Chemistry and Chemical Biology at Sorbonne Université in 2017 (M2 Chimie Moléculaire Program), in parallel with the diploma of the Ecole Normale Supérieure of Paris with a major in chemistry and a minor in theatre studies. She is now a PhD student in Laboratoire des Biomolecules (LBM) and her fellowship is funded by the ANR. She works with Clotilde Policar and Nicolas Delsuc at Laboratoire des Biomolecules (LBM) in the group Metals in Biology  in collaboration with Joelle Vinh at the Biological Mass Spectrometry and Proteomics lab (SMBP) at the ESPCI. Martha presented her work entitled: Quantifying the cellular redoxome: Effect of a MnSOD mimic, a potential metallodrug against Inflammatory Bowel Diseases. A Mn-complex with a superoxide dismutase activity (Mn1) was studied in a cellular model of oxidative stress and inflammation. It was previously shown to have an intracellular anti-superoxide and anti-inflammatory activity 1 . This work describes the use of a metabolic labeling strategy to quantify the effect of Mn1 on the expression levels of proteins and the redox state of cysteines using LC-MS/MS.  Mathieu E. et al., Inorg. Chem 2017, 56, 5, 2555