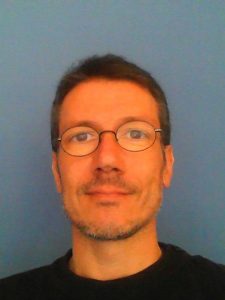 Abstract : In the last years, many strategies have been developed to benefit from oxygenic photosynthesis in the present context of renewable energies. To achieve this, bioelectricity may be produced by using photosynthetic components involved in anodic or cathodic compartments. In this respect, harvesting photosynthetic electrons from living biological systems appears to be an encouraging approach. However it raises the question of the most suitable electrochemical device. In this work, we describe and analyze the performances of an electrochemical device based on a millimeter sized well involving a gold surface as a working electrode. Photocurrents were generated by suspensions of Chlamydomonas reinhardtii algae using quinones as mediators under different experimental conditions. Chronoamperometry and cyclic voltammetry measurements gave insight into the use of this device to investigate important issues (harvesting and poisoning by quinones, photoinactivation…). Furthermore, by introducing a kinetic model originally developed for homogeneous catalytic systems, the kinetics of the electron diverting from this system (Chlamydomonas reinhardtii algae + 2,6-DCBQ + miniaturized setup) can be estimated. All these results demonstrate that this experimental configuration is suitable for future works devoted to the choice of the best parameters in terms of long lasting performances.
Authors : Adnan Sayegh, Guillaume Longatte, Olivier Buriez, Francis-André Wollman, Manon Guille-Collignon , Eric Labbé, Jérôme Delacotte, Frédéric Lemaître

Abstract : In the last decade, following fluorescent dyes and protein tags, pH sensitive false fluorescent neurotransmitters (FFN) were introduced and were valuable for labeling secretory vesicles and monitoring exocytosis at living cells. In particular, the synthetic analog of neurotransmitters FFN102 was shown to be an electroactive probe. Here, we show that FFN102 is suitable to be used as a bioanalytic probe at the widely used PC12 cell model. FFN102 was uptaken in the secretory vesicles of PC12 cells, partially replacing the endogenous dopamine stored in these vesicles. The different oxidation potentials of dopamine and FFN102 allowed to determine that ca. 12% of dopamine was replaced by FFN102. Moreover, the FFN102 was found to be over released through the initial fusion pore suggesting that it was mostly uptaken in fast diffusion compartment of the vesicles.
Authors : Lihui Hu, Alexandra Savy, Laurence Grimaud, Manon Guille-Collignon, Frédéric Lemaître, Christian Amatore, Jérôme Delacotte

Abstract : Plants, algae, and some bacteria convert solar energy into chemical energy by using photosynthesis. In light of the current energy environment, many research strategies try to benefit from photosynthesis in order to generate usable photobioelectricity. Among all the strategies developed for transferring electrons from the photosynthetic chain to an outer collecting electrode, we recently implemented a method on a preparative scale (high surface electrode) based on a Chlamydomonas reinhardtii green algae suspension in the presence of exogenous quinones as redox mediators. While giving rise to an interesting performance (10–60 µA/cm2) in the course of one hour, this device appears to cause a slow decrease of the recorded photocurrent. In this paper, we wish to analyze and understand this gradual fall in performance in order to limit this issue in future applications. We thus first show that this kind of degradation could be related to over-irradiation conditions or side-effects of quinones depending on experimental conditions. We therefore built an empirical model involving a kinetic quenching induced by incubation with quinones, which is globally consistent with the experimental data provided by fluorescence measurements achieved after dark incubation of algae in the presence of quinones.
Authors : Guillaume Longatte, Adnan Sayegh, Jérôme Delacotte, Fabrice Rappaport, Francis-André Wollman, Manon Guille-Collignon and Frédéric Lemaı̂tre

Abstract : An original redox-responsive fluorescent probe combining a rhodamine derivative and a ferrocenyl moiety used as the fluorescence modulator was designed, synthesized and characterized. The fluorescence of this new dyad could be tuned from the redox state of ferrocene, a feature observed both electrochemically and on cancer cells incubated with this probe.
Authors : Martina Čížková, Laurent Cattiaux, Justine Pandard, Manon Guille-Collignon, Frédéric Lemaître, Jérôme Delacotte, Jean-Maurice Mallet, Eric Labbé, Olivier Buriez

Abstract : Strategies to harness photosynthesis from living organisms to generate electrical power have long been considered, yet efficiency remains low. Here, we aimed to reroute photosynthetic electron flow in photosynthetic organisms without compromising their phototrophic properties. We show that 2,6-dimethyl-p-benzoquinone (DMBQ) can be used as an electron mediator to assess the efficiency of mutations designed to engineer a novel electron donation pathway downstream of the primary electron acceptor QA of Photosystem (PS) II in the green alga Chlamydomonas reinhardtii. Through the use of structural prediction studies and a screen of site-directed PSII mutants we show that modifying the environment of the Q A site increases the reduction rate of DMBQ. Truncating the C-terminus of the PsbT subunit protruding in the stroma provides evidence that shortening the distance between QA and DMBQ leads to sustained electron transfer to DMBQ, as confirmed by chronoamperometry, consistent with a bypass of the natural QA°– to QB pathway.
Authors : Han-Yi Fu, Daniel Picot, Yves Choquet, Guillaume Longatte, Adnan Sayegh, Jérôme Delacotte, Manon Guille-Collignon, Frédéric Lemaı̂tre, Fabrice Rappaport, Francis-André Wollman

Abstract : In this work, Fluorescent False Neurotransmitter 102 (FFN102), a synthesized analogue of biogenic neurotransmitters, was demonstrated to show both pH-dependent fluorescence and electroactivity. To study secretory behaviors at the single-vesicle level, FFN102 was employed as a new fluorescent/electroactive dual probe in a coupled technique (amperometry and total internal reflection fluorescence microscopy (TIRFM)). We used N13 cells, a stable clone of BON cells, to specifically accumulate FFN102 into their secretory vesicles, and then optical and electrochemical measurements of vesicular exocytosis were experimentally achieved by using indium tin oxide (ITO) transparent electrodes. Upon stimulation, FFN102 started to diffuse out from the acidic intravesicular microenvironment to the neutral extracellular space, leading to fluorescent emissions and to the electrochemical oxidation signals that were simultaneously collected from the ITO electrode surface. The correlation of fluorescence and amperometric signals resulting from the FFN102 probe allows realtime monitoring of single exocytotic events with both highspatial and temporal resolution. This work opens new possibilities in the investigation of exocytotic mechanisms.
Authors : Xiaoqing Liu, Alexandra Savy, Sylvie Maurin, Laurence Grimaud, François Darchen, Damien Quinton, Eric Labbé, Olivier Buriez, Jérôme Delacotte, Frédéric Lemaître, Manon Guille-Collignon

Abstract : Fluorescence recovery after photobleaching (FRAP) is a standard method used to study the dynamics of lipids and proteins in artificial and cellular membrane systems. The advent of confocal microscopy two decades ago has made quantitative FRAP easily available to most laboratories. Usually, a single bleaching pattern/area is used and the corresponding recovery time is assumed to directly provide a diffusion coefficient, although this is only true in the case of unrestricted Brownian motion. Here, we propose some general guidelines to perform FRAP experiments under a confocal microscope with different bleaching patterns and area, allowing the experimentalist to establish whether the molecules undergo Brownian motion (free diffusion) or whether they have restricted or directed movements. Using in silico simulations of FRAP measurements, we further indicate the data acquisition criteria that have to be verified in order to obtain accurate values for the diffusion coefficient and to be able to distinguish between different diffusive species. Using this approach, we compare the behavior of lipids in three different membrane platforms (supported lipid bilayers, giant liposomes and sponge phases), and we demonstrate that FRAP measurements are consistent with results obtained using other techniques such as Fluorescence Correlation Spectroscopy (FCS) or Single Particle Tracking (SPT). Finally, we apply this method to show that the presence of the synaptic protein Munc18-1 inhibits the interaction between the synaptic vesicle SNARE protein, VAMP2, and its partner from the plasma membrane, Syn1A.
Authors : Frédéric Pincet, Vladimir Adrien, Rong Yang, Jérôme Delacotte, James E. Rothman, Wladimir Urbach, David Tareste