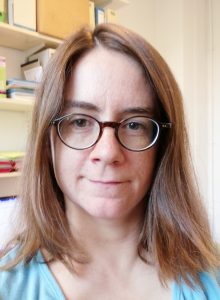 Agathe Espagne studied chemistry at ENS in Paris. She specialized in mechanistic photochemistry and femtosecond transient absorption spectroscopy as a graduate student in the group of Monique Martin, studying the cis/trans photoisomerization of photoactive protein PYP. She received her PhD degree in physical chemistry in 2005. She was then trained in femtosecond fluorescence spectroscopy in the group of Ahmed H. Zewail at Caltech, and in femtosecond IR spectroscopy in the group of Thomas Elsaesser at MBI Berlin. In 2006 she joined the group of Klaus Brettel at CEA-Saclay, where she investigated photoinduced electron transfer in flavoproteins with transient absorption spectroscopy on subnanosecond to millisecond timescales. She was recruited by CNRS as a permanent researcher in 2007 and focussed then her research on fluorescent proteins photophysics, photochemistry, engineering and applications. First member of LCP in Orsay, she moved to ENS in 2012.