The animal-like cryptochrome of Chlamydomonas reinhardtii (CraCRY) is a recently discovered photoreceptor that controls the transcriptional profile and sexual life cycle of this alga by both blue and red light. CraCRY has the uncommon feature of efficient formation and longevity of the semireduced neutral form of its FAD cofactor upon blue light illumination. Tyrosine Y373 plays a crucial role by elongating, as fourth member, the electron transfer (ET) chain found in most other cryptochromes and DNA photolyases, which comprises a conserved tryptophan triad. Here, we report the full mechanism of light-induced FADH• formation in CraCRY using transient absorption spectroscopy from hundreds of femtoseconds to seconds. Electron transfer starts from ultrafast reduction of excited FAD to FAD•– by the proximal tryptophan (0.4 ps) and is followed by delocalized migration of the produced WH•+ radical along the tryptophan triad (∼4 and ∼50 ps). Oxidation of Y373 by coupled ET to WH•+ and deprotonation then proceeds in ∼800 ps, without any significant kinetic isotope effect, nor a pH effect between pH 6.5 and 9.0. The FAD•–/Y373• pair is formed with high quantum yield (∼60%); its intrinsic decay by recombination is slow (∼50 ms), favoring reduction of Y373• by extrinsic agents and protonation of FAD•– to form the long-lived, red-light absorbing FADH• species. Possible mechanisms of tyrosine oxidation by ultrafast proton-coupled ET in CraCRY, a process about 40 times faster than the archetypal tyrosine-Z oxidation in photosystem II, are discussed in detail. 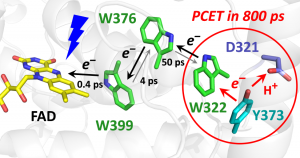