The name of messenger RNAs-“messenger », has always implicated the role of this class of RNA molecules as to transmit DNA information to protein, an intermediate. But now our data suggest that an mRNA can function more. Using a bottom-up approach to combine magnetic nanoparticles, synthetic RNAs, and human cell extract, all confined in water-in-oil droplets, we observed that a messenger RNA not only can be translated into functional proteins, but can also serve as a spatiotemporal scaffold, to concentrate the nascent proteins and their function at the translation site, and for the time being of translation. This temporary site-specific concentration is observed to trigger structural polymorphism of actin filament meshworks, the choreographers of cell shape and function. From a biological perspective, this phenomenon may represent a general mechanism of spatial control that cells use to produce functional diversity. 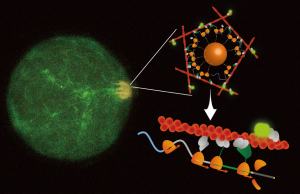