Since the early work of Bernard Katz, the process of cellular chemical communication via exocytosis, quantal release, has been considered to be all or none. Recent evidence has shown exocytosisto be partial or ‘subquantal’ at single-cell model systems, but there is a need to understand this at communicating nerve cells. Partial release allows nerve cells to control the signal at the site of release during individual events, where the smaller the fraction released, the greater the range of regulation. Here we show that the fraction of the vesicular octopamine content released from a living Drosophila larval neuromuscular neuron is very small. The percentage of released molecules was found to be only 4.5% for simple events and 10.7% for complex (i.e., oscillating or flickering) events. This large content, combined with partial release controlled by fluctuations of the fusion pore, offers presynaptic plasticity that can be widely regulated. 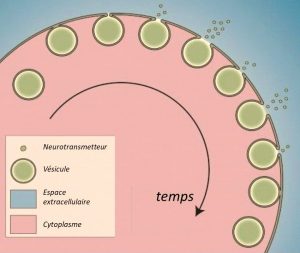