Carbonic acid H2CO3 (CA) is a key constituent of the universal CA/ bicarbonate/CO2 buffer maintaining the pH of both blood and the oceans. Here we demonstrate the ability of intact CA to quantita- tively protonate bases with biologically-relevant pKas and argue that CA has a previously unappreciated function as a major source of protons in blood plasma. We determine with high precision the temperature dependence of pKa(CA), pKa(T) = −373.604 + 16,500/T +56.478 ln T. At physiological-like conditions pKa(CA) = 3.45 (I =0.15 M, 37 °C), making CA stronger than lactic acid. We further demonstrate experimentally that CA decomposition to H2O and CO2 does not impair its ability to act as an ordinary carboxylic acid and to efficiently protonate physiological-like bases. The conse- quences of this conclusion are far reaching for human physiol- ogy and marine biology. While CA is somewhat less reactive than (H+)aq, it is more than 1 order of magnitude more abundant than (H+)aq in the blood plasma and in the oceans. In particular, CA is about 70× more abundant than (H+)aq in the blood plasma, where we argue that its overall protonation efficiency is 10 to 20× greater than that of (H+)aq, often considered to be the major protonating agent there. CA should thus function as a major source for fast in vivo acid–base reactivity in the blood plasma, possibly pene- trating intact into membranes and significantly helping to com- pensate for (H+)aq’s kinetic deficiency in sustaining the large proton fluxes that are vital for metabolic processes and rapid enzymatic reactions. 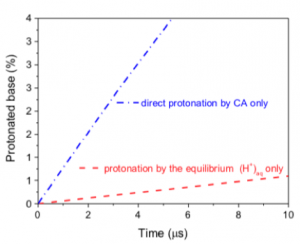