Confocal laser scanning microscopy (CLSM) is the most popular technique for mapping the subcellular distribution of a fluorescent molecule and is widely used to investigate the penetration properties of exogenous macromolecules, such as cell-penetrating peptides (CPPs), within cells. Despite the membrane-association propensity of all these CPPs, the signal of the fluorescently labeled CPPs did not colocalize with the plasma membrane. We studied the origin of this fluorescence extinction and the overall consequence on the interpretation of intracellular localizations from CLSM pictures. We demonstrated that this discrepancy originated from fluorescence self-quenching. The fluorescence was unveiled by a “dilution” protocol, i.e. by varying the ratio fluorescent/non-fluorescent CPP. This strategy allowed us to rank with confidence the subcellular distribution of several CPPs, contributing to the elucidation of the penetration mechanism. More generally, this study proposes a broadly applicable and reliable method to study the subcellular distribution of any fluorescently labeled molecules. 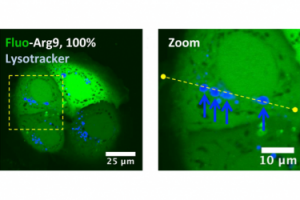