A dual electrofluorescent probe (FFN42) belonging to the fluorescent false neurotransmitter family was rationally designed for investigating cell secretion. This probe, which comprises a coumarin core with one amino and two hydroxy groups, is very promising due to its electroactive and fluorescent properties. The optimal excitation and emission wavelengths (380 nm and 470 nm respectively) make this probe adapted for use in fluorescence microscopy. FFN42 has a quantum yield of 0.18, a molar absorption coefficient of 12000 M-1cm-1 and pKa values of 5.4 and 6.7 for the hydroxy groups. The electroactivity of FFN42 was evidenced on carbon fiber and ITO electrodes at relatively low oxidation potentials (0.24V and 0.45V vs Ag/AgCl respectively). Epifluorescence observations showed that FFN42 accumulated into secretory vesicles of PC12 and N13 cells. Toxicity tests further revealed that FFN42 had no lethal effect on these cells. Amperometric data obtained on carbon fiber electrodes proved that the probe is released by N13 cells. 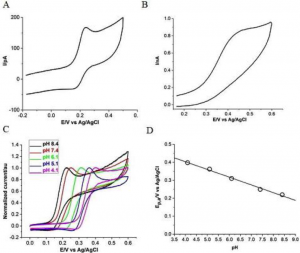